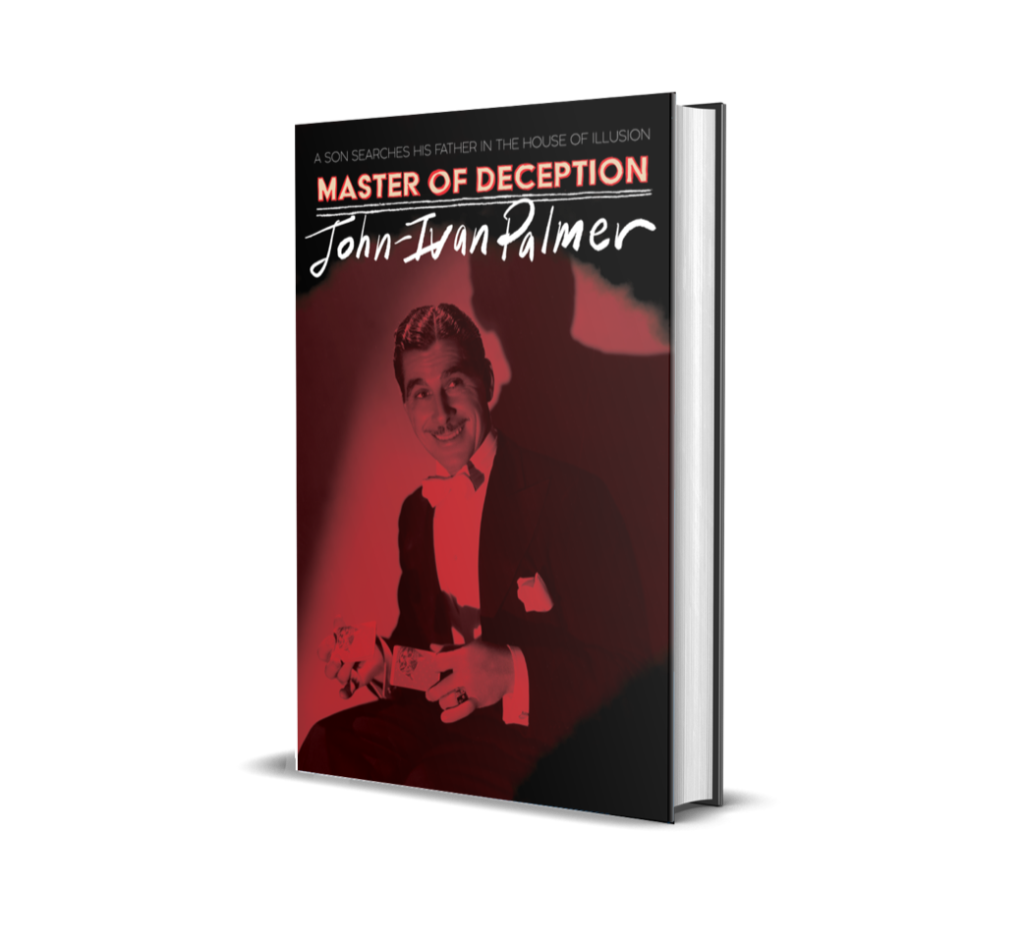 MASTER OF DECEPTION, long awaited memoir on growing up in the dark and closed world of 1950s floor show culture, is now available in bookstores worldwide. (Depicted on the cover is the author’s father, Jack Pyle.)

John-Ivan Palmer, the son of a nightclub magician and Croatian actress,  grew up in trailer parks and dressing rooms. He taught himself to read and write, forward and backward with either hand, in the back seat of the car en route to his parents’ many engagements. Although he technically never graduated from the first grade he later attended three universities, but did not graduate from any of them either.

On the West Coast, while carrying on his father’s profession, he published journalistic work in the San Francisco Chronicle, San Francisco Examiner, Milwaukee Journal and Oregon Journal. Literary magazines (The Smith, December, NewsArt, Wisconsin Review, Other Voices) published his fiction. As with his schooling, he composed his writing in dressing rooms and hotel lobbies. After receiving the Pushcart Prize for fiction, his  essays and literary criticism were widely published and anthologized in the US, Britain, Israel and Japan.

Given his background, the author’s work deals with unorthodox narratives, yet in a disciplined, belletristic style.  Tom Bradley’s irreverent interview with Palmer in Exquisite Corpse, A Journal of Art and Life (corpse.org/index.php?option=com_content&task=view&id=559&Itemid=40) describes the author as an “odd and versatile figure in the literary world.”

“Listen to Me! Words and the Amplified Voice,” an essay on the history of speaking to large crowds without a microphone. Whistling Shade Literary Journal, Summer 2020 (http://www.whistlingshade.com/index.html). “How did Abraham Lincoln deliver the Gettysburg Address to 20,000 people using only the wind that came out of his body?”

“Kissing in Church” is a short story in the spring 2018 issue of Literary Nest (https://theliterarynest.com/issues/vol-4-issue-1/fiction/john-ivan-palmer/). An ex-nun and a hack writer share their chaste divinities in empty churches.

“Dragged Around by the Great Maurice,” is a study in X-rated stage hypnotism that appears in Hypnopomp Literary Journal, issue 4, 2018 (https://hypnopompblog.wordpress.com/2018/04/15/dragged-around-by-the-great-maurice-john-ivan-palmer-essay/). Included in Reflections on the Nature of Staged Influence (unpublished).

“Dining With the Breatharians,” essay on those who profit by convincing others they can thrive on a diet consisting solely of air. Illustrated. Whistling Shade, spring, 2018 (http://www.whistlingshade.com/1801/Dining_With_the_Breatharians.htm).

“The Reptilian,” is a work of fiction included in the British anthology The Whisper Place published by EllipsisZine.com, 2018. Available in print only at https://www.ellipsiszine.com/four/